Food for the Future

Our food production system, already stressed to meet today’s demands, will face even more challenges in the future to provide for a growing population and adapt to a changing climate. Farmers need to know if their current agricultural systems will continue to produce the yields of today, and what adaptations could be beneficial. Government policy-makers need to understand if food prices and availability will be impacted, and if so by how much and where. International organizations need to identify which regions will be the most vulnerable to the coming changes and thus likely to face food insecurity.

A new two-part volume just published by Imperial College Press, “Handbook of Climate Change and Agroecosystems: The Agricultural Model Intercomparison and Improvement Project (AgMIP) Integrated Crop and Economic Assessments” edited by Cynthia Rosenzweig and Daniel Hillel, features the work of over 200 scientists using the latest data, models, and technologies to forecast answers to these pressing questions.

Editor Cynthia Rosenzweig with some of the authors as they receive their copies of the book at AgMIP5.

The Agricultural Model Intercomparison and Improvement Project (AgMIP) is a global community of scientists that quantifies climate change impacts on food security. It has developed standard methods of research combining climate, crop and economic models used by research teams in regions around the globe to simulate the vulnerabilities of and adaptive strategies for their local agricultural systems. These assessments provide information about future crop yields and economic conditions, such as income and poverty rates, which can help agricultural decision-makers plan for the future.

“AgMIP is dedicated to building the capacity of researchers and their institutions to project how climate change will affect agricultural productivity and farmer livelihoods around the world,” stated Cynthia Rosenzweig co-editor. “The Handbook provides new methods of regional integrated assessment that can be used to project climate change impacts in both developed and developing countries.”

Part One of the Handbook presents an overview of AgMIP, the new methods for the regional integrated assessments, and describes some of AgMIP’s other initiatives including global gridded modeling, simulation of crop pests and diseases, site-based crop-climate sensitivity studies, and scaling. Part Two highlights the results of the AgMIP Regional Research Teams in Sub-Saharan African and South Asia using the new methods.

“The two-part handbook brings in experiences from around the globe but with context and regional specific agricultural pathways aimed at improving resilience and risk reduction in smallholder farming systems in the face of climate change. The integrated approach embraces participation of different stakeholders enabling adoption strategies to be locally developed and have high probability of adoption.” stated Patricia Masikati, lead author of the chapter on crop-livestock intensification in Southern Africa.

In Sub-Saharan Africa and South Asia climate changes are projected to lead to reduced incomes and increased poverty in most locations compared to a future in which climate change does not occur. However, although it is likely that climate change will negatively impact most farming systems studied, when economics and adaptation packages where considered future farming systems will be more capable of absorbing yield losses than the farming systems under current practices.

“The book not only summarizes the most recent data and information on future climate effects on agriculture but also provides in-depth synthesis of stakeholder concerns emerging from highly focused discussions by top agricultural scientists, modelers and policy experts at various national and international forums,” commented Job Kihara lead author of the Sub-Saharan Africa overview chapter. “With the momentum being gained on climate smart agriculture generally in Sub-Saharan Africa, this book is timely.” 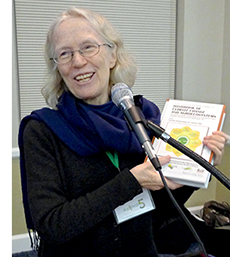 This impressive new publication benefits a wide range of communities, including agronomists, crop scientists, economists, soil scientists, climatologists, geographers, academics, policy-makers and those on the front lines of farming systems. The reader is exposed to innovative scientific methodology and assessments for the agricultural sector under climate change, leading to improved adaptation in both developed and developing countries.

Jeffrey Sachs, Director of the Earth Institute at Columbia University wrote, “Top agricultural scientists from around the world have taken up the challenge of sustainable agriculture, with the specific focus on integrating agronomic, climatological, biophysical and socio-economic perspectives and processes. Every chapter (of the Handbook) contributes to addressing the growing food-security challenges facing the world.”