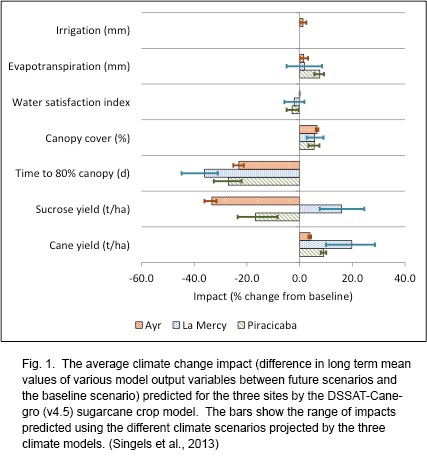 The sugarcane team is led by Peter Thorburn, Abraham Singels, and Fabio Marin. Collaborating scientists are intercomparing their models for response to CO2, temperature, rainfall, and other factors at four sentinel sites representing variation in sugarcane productivity. The effort to date has been distributed amongst the sugarcane research community, with various meetings between the team leaders (commencing in Brazil, August 2011).

Work to date has centered on developing parameterisations and calibrations of the models at various sites (Singels et al., 2013; Marin et al., 2013), and commencing the exploration of climate change sensitivities (e.g. Fig 1). Sentinel sites located in Australia, Brazil, Reunion Island, U.S.A and Zimbabwe have been selected and data from those are in the process of being entered into a central database in standard format. Seven modelling groups have accepted the invitation to participate, and the data will be distributed to them when collated.