With a global population on track to exceed 9 billion by the middle of the century and climate change altering growing conditions across the planet, the need to figure out if agricultural production will keep pace is becoming more urgent, leading agricultural economists say.

In a panel discussion held yesterday by the nonprofit organization Resources for the Future, representatives from the World Bank, the Department of Agriculture and academia said government agencies are collaborating with researchers and local officials to predict the economic risks that climate change poses to farming households around the world.

Finding a way to quantify those economic risks is a complex challenge because of the amount of information that has to go into modeling future crop yields, said Elizabeth Marshall, an economist for USDA’s Economic Research Service.

“We need to downscale data from global models and make it relevant [to farmers], which is very difficult,” she said.

USDA has been working with Agricultural Model Intercomparison Improvement Project, or AgMIP, an international endeavor of more than 600 researchers that integrates crop yield research and information technology with climate change and economic modeling. The nearly five-year project is meant to provide more accurate predictions of vulnerability to climate change and also help producers adapt to changing growing conditions. 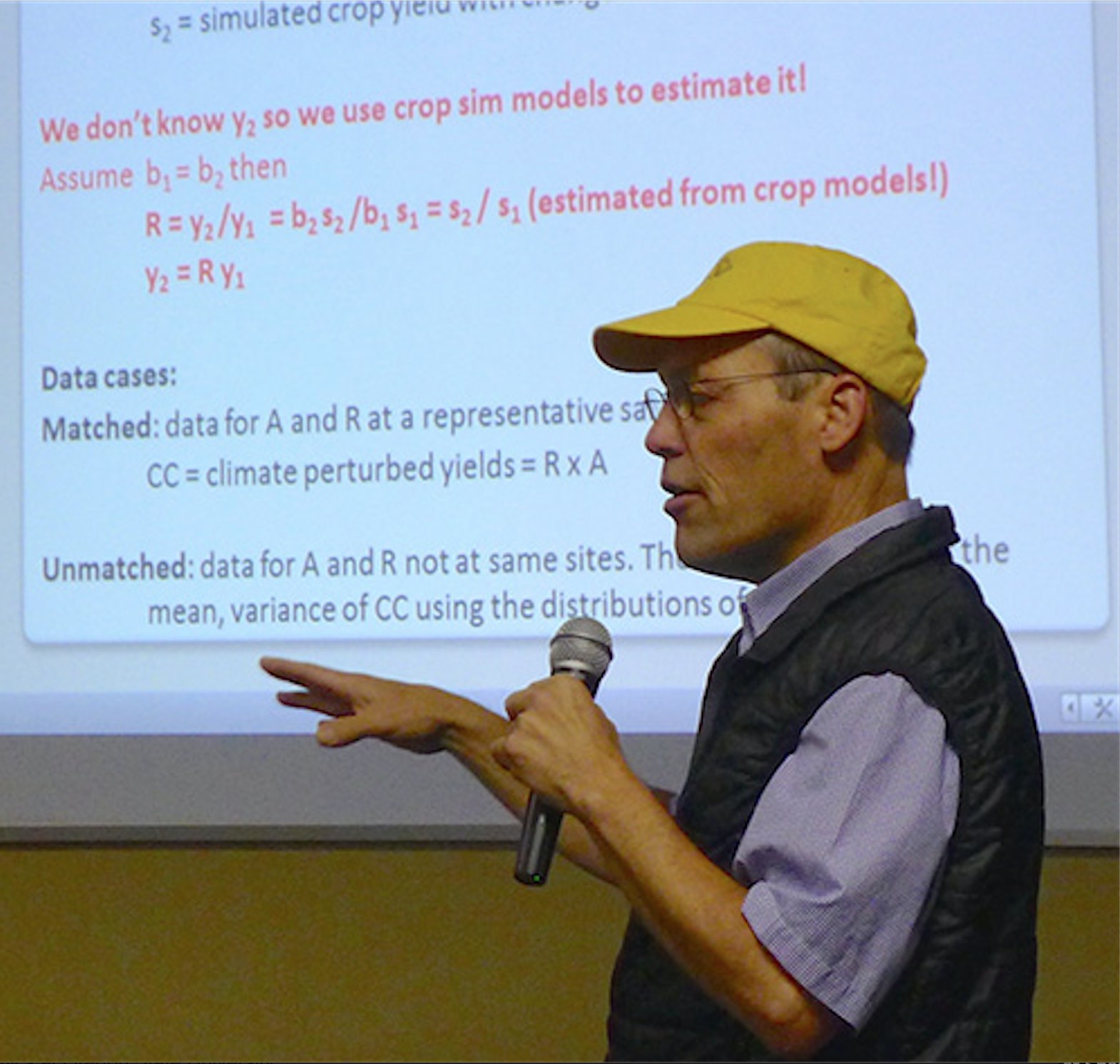 The systems-based approach addresses the effects of climate change on a regional to global scale and already has eight projects in sub-Saharan Africa and South Asia combined. Researchers develop their crop yield predictions using both current climate data and climate modeling. The predictions are then combined with crop yield models, which in turn are evaluated within economic models to determine the potential impact on prices and trade.

One of the strengths of AgMIP is that it doesn’t just look at the average change crop yields or prices, but also assesses the degree of vulnerability that the specific region or household is likely to experience, said John Antle, the initiative’s co-principal investigator and a professor in the Department of Applied Economics at Oregon State University.

More studies, better predictions
As an example, he pointed to anticipated average increases in winter wheat yields in states in the Pacific Northwest as a result of climate change.

“Even though the net impact is positive, that doesn’t mean everyone is happy,” he said.
Across the planet, predictions of potential losses are highly variable. A joint global economic modeling study by USDA and AgMIP researchers predicted that by the middle of the century, average agricultural productivity will decline by 17 percent, with maximum declines exceeding 40 percent. By the same period, average yields could go down by 11 percent; in some places, production could increase slightly; and elsewhere, decreases in yields could reach nearly 40 percent.

Commodity prices were especially unpredictable; average prices were forecast to go up by 20 percent, but prices could go up by as much as 60 percent, according to the study, published last year in the Proceedings of the National Academy of Sciences.
In order to reduce some of the uncertainty associated with predicting the effects of climate change on agriculture, AgMIP researchers also use intercomparisons of multiple different crop models, said James Jones, who works on the biophysical component of AgMIP and is also the director of the Florida Climate Institute.

“We know our models aren’t perfect, so we don’t just rely on one model,” said Jones. In order to make predictions about wheat yields in a previous study, researchers incorporated data from about 27 studies from around the world.

“We’ve shown in our research that when we compare the results, the median of the results of all the studies is better than any one study’s predictions. So that gives us more confidence that our estimates are the best we can do with current knowledge,” he said.

No ‘crystal ball’
Currently, USDA is working with AgMIP both on the intercomparison of crop simulation models and on another project that is evaluating crop models’ ability to estimate crop water use, according to Jerry Hatfield, laboratory director and supervisory plant physiologist at USDA’s Agricultural Research Service.

AgMIP researchers also try to keep their predictions as grounded in facts as possible by comparing predictions to actual yields in a particular region — they ask stakeholders about what they believe the future agricultural practices may be in order to help shape their predictions.

“There’s a lot of uncertainty about how much the climate will change and the time period it will occur,” said Jones. “We don’t have a crystal ball; what we do have is a lot of knowledgeable people.”

Now the challenge is presenting the information in a meaningful way to farmers, according to Antle.

“Stakeholders want us to answer the question, ‘What do we do?'” said Antle. “Clearly, we need to translate these impacts on income into meaningful outcomes.”

Such efforts are already happening in countries like Uruguay, according to Holger Kray, lead agricultural economist for the World Bank’s Agriculture Global Practice.

The country is among the world’s top 10 exporters of agricultural products such as wool, beef and dairy, despite having a population of just 3 million.

Because agricultural products account for 70 percent of Uruguay’s total exports, the country’s gross domestic product is heavily affected by environmental changes like drought or extreme weather events. In order to protect its economy, the government requires that every farmer have a three-year soil management plan to conserve resources. Nearly two dozen government agencies have pooled their climate change-related data into a single information resource to make it easier for researchers, policymakers and farmers to track the latest research and develop more effective plans, said Kray.

Such a coordinated approach could serve as an example for how other nations could implement their own adaptive measures, even as researchers such as Antle work on finding more definitive measures of the future global food supply.

“Assessing food security isn’t really possible yet, but this [research] is a step toward that,” he said.