The Pest And Disease Model IntercomparisonAnd Improvement Project’s (PeDiMIP) mission is to improve agricultural models for pests and diseases (PDM), and to enhance the scientific and technological capabilities for assessing impacts of climate variability and change and other driving forces on agriculture. Our goal is to create a next generation knowledge platform for agricultural pest and disease modeling.

Open initiative gathering scientists with a specific interest in the development and application of simulation models of agricultural pests and diseases, and their coupling with crop models. 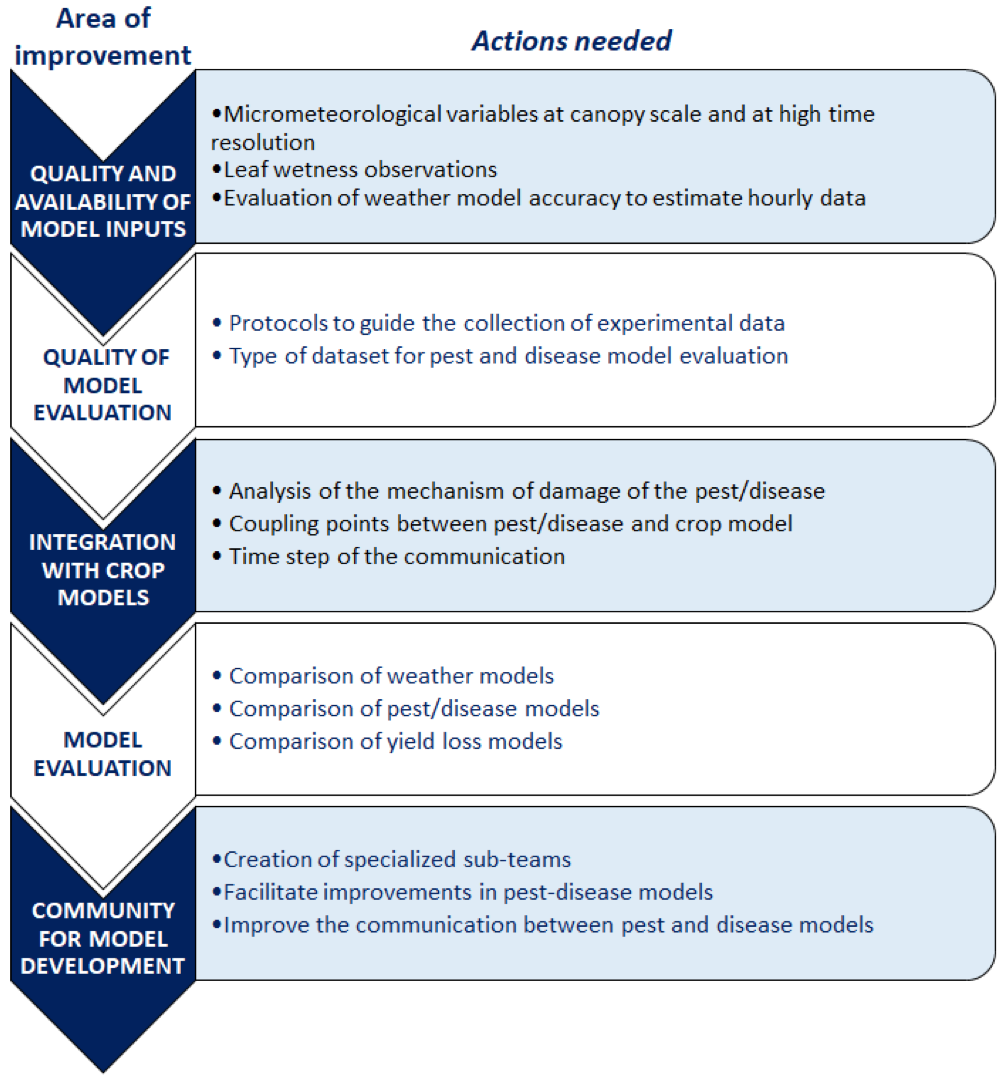 We drew a roadmap to improve the simulation of the impacts of plant PD, fostering ìanew community of PD modelers. We developed a framework to assess PD impacts on food security, proposing a modelling approach to address the functioning of food systems exposed to biotic risks. Progress is being made with wheat modellers, KCKersebaumand SAsseng

Changes in climate and extreme events could have significant effects on agricultural pest and disease distribution and magnitudes and on the distribution of host species. In response to the need to include modeling of pests and disease in agricultural assessments, the Agricultural Model Intercomparison and Improvement Project (AgMIP) held a workshop in Gainesville, Florida February 23-25, 2015 with over 70 attendees.

Food production must be increased in order to meet the needs of a growing population, projected to increase to over 9 billion by the year 2050. As 2050 approaches climate is also changing, creating higher temperatures over most of the globe and likely increasing heat waves and drought in some areas and excess rainfall and flooding in others.

The workshop convened with the goal of advancing insect and disease modeling for use in regional and global assessments of crop production, climate change, and food security through initiation of model intercomparison and improvement teams. The workshop featured both keynote speakers and breakout sessions. The keynote speakers summarized their understanding of the current status of modeling pests and diseases of crops, approaches for using those models with crop and economic models for estimating losses in productivity and impacts on economic conditions. In addition, the keynote speakers highlighted example studies on impacts of climate change on crop production and economics at different scales.

Keynote speakers addressed specific topics, including modeling insect populations and their damage to crops at different levels of complexity, focusing on models used in assessments at regional to global scales, modeling plant pathogens and disease outbreaks along with impacts on cropping systems at regional to global scales and different levels of complexity, modeling cropping systems with capabilities to estimate effects of damage by pests and diseases, methods for linking models of insect pests and diseases with crop models to predict yield loss, designing and implementing model intercomparisons for crop insect pests and diseases, and economic model-based assessments of insect and disease impacts on food and economic conditions at different scales.

For more information about the workshop please click here.