The Indo-Gangetic Basin is located across the northeastern border of India and includes portions of Bangladesh, Nepal, and Pakistan. The region has seen increased variability in its monsoonal season along with more frequent extreme weather phenomena such as heat waves and intense rainfall. These anomalies can have major impacts on the agriculture industry in this part of the world. Assessing how climate change may play a role in continued seasonal variability going forward is important for future planning.

Phase 2 (2015-2017) applied simulation tools within major farming system ecologies of the central and eastern portions of the region. Through this, linkages between agricultural productivity and impending climate change were better understood. By engaging with stakeholders within the Indo-Gangetic Basin (IBG) region, the Team more accurately understood these linkages and their connections to livelihoods. From here, management and policy strategies were listed out to determine the effective responses to the region’s changing conditions.

The IGB Project expanded stakeholder dialogue during Phase 2. This resulted in meaningful and accurate integrated assessments. At the Meerut and Karnal sites, Phase 2 incorporated the simulation of more crops, while also integrating a livestock component. This integration provided a more in-depth assessment of these locations.

The Team achieved its goals through various methodologies. The Team continued its focus on the economic models, farming systems, and development of RAPs within the region. They also evaluated historical and future climate analysis along with delivering harmonized data. In addition, the team ensured results and research were co-developed with stakeholders. 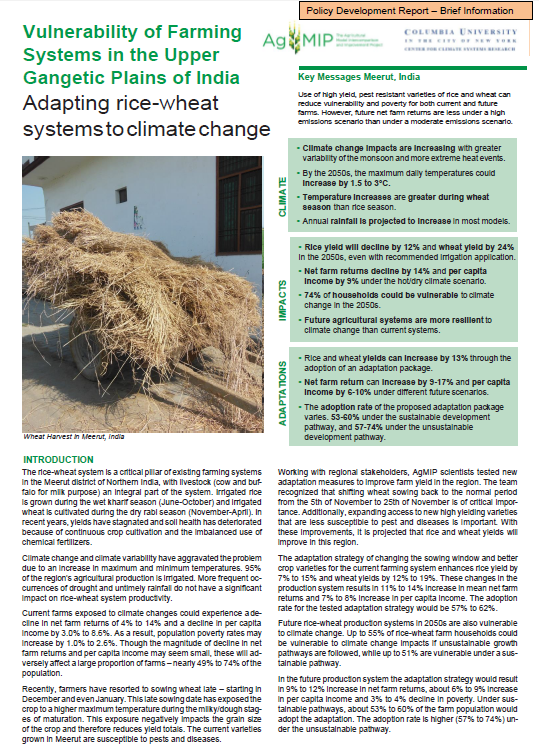 Policy Brief: Vulnerability of Farming
Systems in the Upper Gangetic Plains of India