A warmer world is expected to have severe consequences for global agriculture and food supply, reducing yields of major crops even as population and demand increases. Now, a new analysis combining climate, agricultural, and hydrological models finds that shortages of freshwater used for irrigation could double the detrimental effects of climate change on agriculture.

Given the present trajectory of GHG emissions, the direct effects of climate change on agriculture alone could reduce food production from maize, soybeans, wheat and rice by as much as 43 percent by end-of-century, according to agricultural models. But when effects of a warming climate on freshwater supply are estimated using hydrological models, further agricultural losses could occur due to the necessary reversion of 20 to 60 million hectares of irrigated fields back to rain-fed crops. 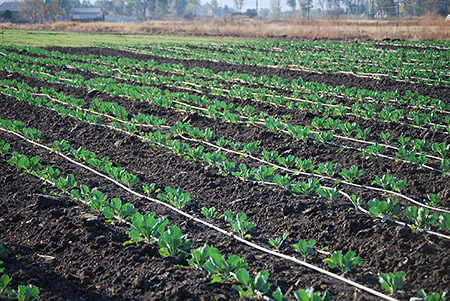 “It’s a huge effect, and an effect that’s basically on the same order of magnitude as the direct effect of climate change,” said Joshua Elliott, a research scientist with the Center for Robust Decision Making on Climate and Energy Policy (RDCEP) at the Computation Institute, a joint initiative of the University of Chicago and Argonne National Laboratory and lead author of the paper. “So the potential is the effect of limited irrigation availability in some regions could end up doubling the effect of climate change.”

The research was led by Elliott and colleagues from the Agricultural Model Intercomparison and Improvement Project (AgMIP), as part of the Inter-Sectoral Impacts Model Intercomparison Project (ISI-MIP). The paper is among 12 featured in a special feature of Proceedings of National Academy of Sciences dedicated to ISI-MIP research, to be published on December 17, 2013.

Agricultural models and hydrological models both incorporate the influence of climate, but are designed by different scientific communities for different purposes. While agricultural models simulate how temperature, precipitation and other climate factors may alter the yield for various crops, hydrological models seek to estimate stream flow, water availability, storm runoff, and other water-related characteristics.

Where the two types of models overlap is in estimating the amount of water used for agricultural irrigation, by far the largest human use of freshwater in the world. But Elliott and colleagues found that each type of model produces dramatically different predictions for the future demand for freshwater irrigation when fed with forecasts predicted by climate models.

The group discovered discrepancies in how hydrological models incorporate processes such as the carbon cycle and crop water productivity when compared to agricultural models – a finding that will help make current models more accurate.

Under climate change, the models predicted a loss of between 400 and 2600 petacalories of food supply, 8 to 43 percent of present day levels. But the decline in freshwater availability – and conversion of irrigated cropland to rain-fed– is predicted to contribute an additional loss of 600 to 2900 petacalories, the researchers discovered.

However, while the models predicted freshwater shortages in some areas of the world, such as the western United States, India and China, other regions were predicted to have a surplus of freshwater. Redistributing that excess water to to add irrigation to some rainfed crop areas could dampen some of the consequences of climate change upon irrigation and agriculture, Elliott said.

“We found that maximal usage of available surplus freshwater could end up ameliorating between 12 and 57 percent of the negative direct effects of climate change on food production,” Elliott said. “However, there are lots of different political, economic and infrastructural reasons why you would consider that to be overly optimistic.”

The results are among several major findings reported in the ISI-MIP special issue of PNAS by the AgMIP group, which conducted a “fast-track” exercise to generate new knowledge about climate change impacts on agriculture for the Fifth Assessment Report of the Intergovernmental Panel on Climate Change.

Cynthia Rosenzweig, AgMIP Co-PI commented, “Understanding the climate change implications of freshwater availability is key to the future food security goals of society. The rigorous AgMIP multi-model approach is enabling advances in research on how climate change will affect agriculture worldwide and water is a vital component.”