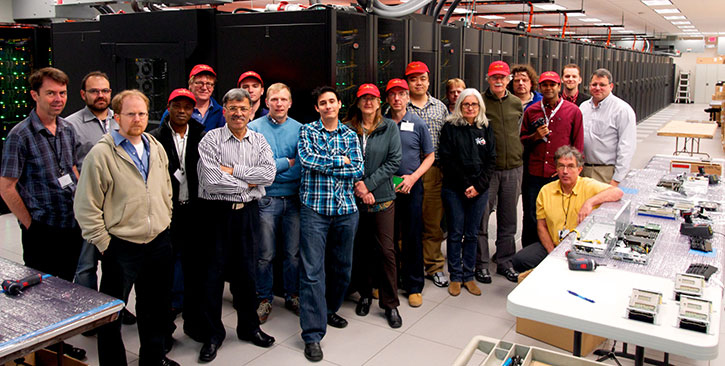 The “Austin Hackathon”: helping crop models communicate with each other

One of the most important, and most complicated aspects of creating a model is developing a way for it to be compatible with other models, so that results can be compared and relevant conclusions drawn from them.

Over the past 12 months, AgMIP (the Agricultural Model Intercomparison and Improvement Project) held a series of rapid development workshops, also known as sprints, to provide the opportunity for crop modeling and information technology experts to work together in creating a common language that can be used by a wide array of models. The goal is that all the modeling groups from around the world participating in the project will have access to all AgMIP datasets, making it easier to compare the diverse results, identify the uncertainties, and improve the models’ capabilities. The sprints were developed and organized by Cheryl Porter and Chris Villalobos, both from the University of Florida.

The latest sprint, the “Austin Hackathon”, was recently held in Austin, Texas on February 4th-8th, 2013. The sprint was the idea of Steve Welch of Kansas State University, sponsored by the iPlant Collaborative and hosted at the Texas Advanced Computing Center (TACC). Participating teams, which had worked together at previous sprints, expanded and enhanced the capabilities of their applications at the Austin workshop.

Dean Holzworth from the Commonwealth Scientific and Industrial Research Organisation (CSIRO) in Australia and member of the team working on the APSIM crop model was very enthusiastic about the work carried out during the workshop: “excellent week! I really enjoy coding workshops and I am very excited by what AgMIP is trying to achieve!” he said at the end of the event. “An excellent workshop – we did real progress with respect to developing working translators” added Ioannis Athanasiadis, from the Democritus University of Thrace in Greece, and a member of the APSIM team.

Throughout the “Hackathon” different teams worked on improving the diverse models. Holzworth and Athanasiadis fixed several issues in the APSIM model discovered by crop modelers at previous AgMIP workshops and also implemented software to convert simulated model outputs into data that can be used in economic models. Domi Ripoche and Julien Cufi from the Institut National de la Recherche Agronomique in France worked on the STICS model to enhance the existing capability of the translators, link these with the desktop user interfaces for AgMIP data translation, and create the ACMO (AgMIP Crop Model Output) translators for simulated model outputs. Dirk Raes from the University of Leuven in Belgium and Rob Knapen from Wageningen University in the Netherlands worked on the AquaCrop model to develop data translation tools that are crucial to the success of several of the AgMIP regional teams working on integrated assessments in Sub-Saharan Africa.

Dirk Raes was very pleased with the progress achieved by his team and commented that “the humming of the Stampede computer across the corridor” kept everybody going.

Sander Janssen, Johnny teRoller and Daniel van Kraalingen, all from Wageningen University, updated the previous translators of the WOFOST model to work with multiple sites and multiple years of data in a single object and modified their model to handle batch simulations in a command line mode. Roger Nelson from Washington State University, the only one-person team in the sprint, worked to expand and enhance existing data translation tools for the CropSyst model. Finally, the InfoCrop (Naveen Kalra from Tata Chemicals in India and Sudheer Pamuru from Concat Systems, Inc.) and SarraH (Henri Songoti from Agrhymet in Niger and Meng Zhang from the University of Florida) teams developed the entire framework of the translator of their respective models for weather, soil, and management data using a template approach.

Several inter-model working groups met to discuss the development of common functions that are of use to all or several of the models. Other topics of general interest included soil layer aggregation, reference evapotranspiration, the use of high performance computer systems, and error logging.

There is still much advancement to be made, and teams will continue working to improve the models. In regards to this, Rob Knapen expressed he “would like to see the translators linked to ontologies, and the participating AgMIP models linked to OpenMI”.

Given the excellent results at the “Austin Hackathon”, there are already plans for two possible sprints later this year, the first in Wageningen, Netherlands and the second at the Oak Ridge National Laboratory in Tennessee. These would provide the opportunity for crop modelers and IT experts to continue working together in developing the applications and tools necessary so that data can be easily shared across all the participating models.