The United States Department of Agriculture’s (USDA) “Climate Change, Global Food Security, and the U.S. Food System” report, co-authored by AgMIP principal investigator, John Antle, has officially been downloaded over a half-million times! Since its release it has averaged over 4700 downloads per day by people and organizations across the globe. 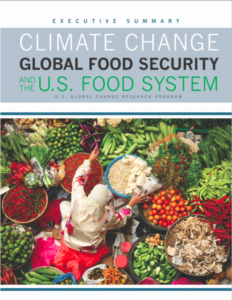 Completed in December 2015, the report breaks down the science behind food security assessment and how it may be altered under a changing climate in the future. The study’s high popularity is a major accomplishment that the USDA is extremely proud of. United States Secretary of Agriculture, Tom Vilsack, cites the report regularly during international discussions due to its importance on a worldwide scale.

The greatest achievement however is that the report has changed the discussion around food security. Organizations such as the World Food Programme, the Food and Agriculture Organization, and the U.S. National Security Council are utilizing the report on a regular basis. They are integrating the work done by the USDA into their day-to-day and strategic activities.

An expanded discussion around the findings of the report is going to result in more people around the world being able to eat than otherwise would have as the climate changes. This is the best possible outcome and one that can continue to take place with raised food security awareness going forward.