Meeting the world’s growing demand for food in coming decades is likely to become more difficult as already stressed agricultural systems will be challenged by population growth and rising income in some of the world’s poorest regions. Climate change will exacerbate the challenges in many dimensions. However, are the effects of climate change more serious than other threats to sustainable food security?

Models that incorporate both the effects of climate change and socioeconomic changes can assist in disentangling the relative consequences of a range of threats and identify potential policy interventions. Today’s models that incorporate agriculture often give conflicting results. Comparisons of their results help to identify the sources of differences and provide deeper insights to aid in policy formation and program development. 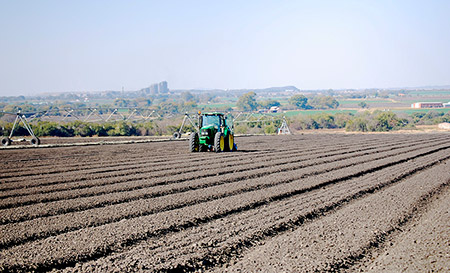 A recently published paper “Climate change effects on agriculture: Economic responses to biophysical shocks”, Nelson et al., in a special Inter-Sectoral Impact Model Intercomparison Project (ISI-MIP) feature of the Proceedings of the National Academy of Sciences of the United States of America December 17, 2913. The study provides a unique perspective on the effects of climate change on agriculture, viewing it through the lens of nine global economic models with climate change inputs from two general circulation models and five crop models. An integral part of the analysis was the close integration of biophysical with socioeconomic modeling, making it possible to assess both the direct biological effects of climate change on yields and the responses of producers, consumers, and traders. The study was coordinated by the Agricultural Model Intercomparison and Improvement Project (AgMIP).

As Gerald Nelson, lead author of the study and former senior research fellow at International Food Policy Research Institute (IFPRI), points out; “We knew that the models have qualitatively similar responses but before this research we had little understanding about why the magnitudes of the model responses differed so much. The size of the changes is as important as the direction.”

The mean of the direct climate change effects on crop yields is a 17 percent decline in 2050 relative to a world with no climate change, but with significant differences by crop, region, and model. The final yield effect is an average 11 percent decline as farmers respond by altering input use and management practices on existing agricultural area, expanding production into new areas (an average increase in area globally of about 8 percent) and reduced consumption (a decline of about 3 percent). The mean effect on crop prices is a 20 percent increase, but for some crops in some regions prices don’t change at all while in others the increase is over 60 percent. Differences in model results arise in assumptions made by the modeling groups in three areas – how easy is it to convert nonagricultural land to cropping, how much can farmers respond to higher prices by raising yields, and how much can international trade flows respond to the different regional climate effects.

Nelson commented “This is the first time that this many of the world’s leading global models with significant representation of agriculture have worked together to understand where their results are similar, where they differ, and importantly, why they differ. The future is uncertain, but understanding what the world’s leading modelers think about how agricultural producers, food consumers, and international trade flows will respond provides valuable guidance to both the public and private sectors as they think about policy changes and investment priorities.”